Skip to content
Home » How Do LEO, GEO and MEO Satellites Differ? 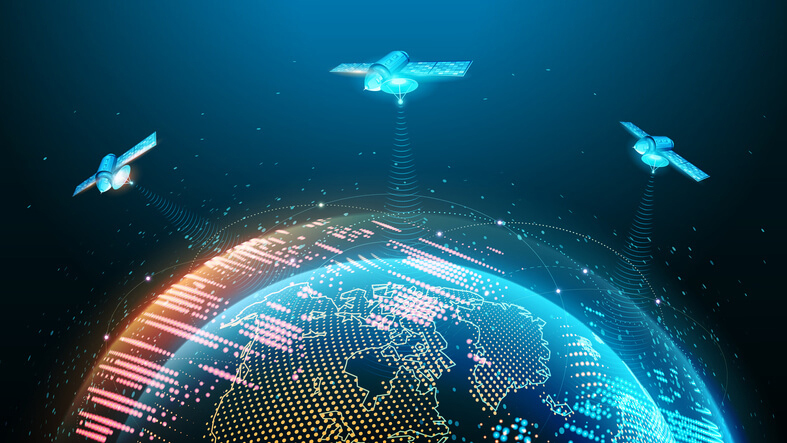 In this guide, we’re breaking down each type of satellite, the critical differences between them and how all three types work together to form a vast global network. Today’s communications technologies rely on all three types to provide consistent, high-quality coverage to consumers worldwide.

What are LEO, GEO and MEO Satellites?

While there are a few other types of satellites, three main types currently dominate the sky and bolster worldwide communications networks:

Consumers are likely most familiar with LEO satellites. For example, SpaceX is currently using LEO satellites to create its Starlink network.

But the most versatile, comprehensive communications networks combine all three types. So, let’s explore the specific role of each.

Low Earth Orbit (LEO) satellites orbit the planet relatively close to the surface, typically between 160 and 1,000 km/99 and 621 miles above the Earth.

It’s hard to establish a frame of reference for this distance if, like most people, you haven’t traveled to space. By comparison:

So, while LEO satellites feature the lowest orbital altitudes of all three satellite types, they’re still significantly higher than any altitude most humans typically encounter. For example, the International Space Station (ISS) is a LEO satellite that orbits at 420 km/261 miles above Earth.

One of the most common applications for LEO satellites is imaging, as a relatively close orbit allows satellites to collect high-resolution images. But, for telecommunications purposes, using LEOs can be complicated:

Geostationary equatorial orbit (GEO) satellites are a type of geosynchronous orbit (GSO) satellite. GSOs take one day to complete one orbit, so they always return to the same point in the sky after one day. GEOs, however, are carefully positioned to remain “stationary” over one point in the sky at all times.

GEO satellites typically orbit the Earth at around 35,780 km/22,233 miles from the surface.

The two most common applications for GEO satellites are:

To transmit information, satellites must be visible to ground antennas. This is why GEOs are commonly used in telecommunications—they’re always within view of a stationary antenna on the ground. But they also cover large areas since they orbit further away from Earth than LEO or MEO satellites, providing optimal coverage for communications networks.

To see (or connect with) the entire planet at one time, communications providers only need a few GEO satellites. However, achieving the same coverage with LEO satellites requires significantly more devices in orbit to maintain constant contact with ground antennas and cover enough area to create a reliable network.

Medium Earth orbit (MEO) satellites can orbit at any altitude between LEO and GEO range—MEO altitudes comprise a wide range.

Like LEO satellites, MEOs can take any orbital path around Earth; GEO satellites, however, must maintain a consistent path to achieve constant contact with a ground antenna.

The European Galileo System, the Global Positioning System (GPS) and other Global Navigation Satellite Systems (GNSS) rely upon MEO satellites for tracking moving aircraft to sending directions to your smartphone. But networking is critical—it isn’t uncommon for navigational networks to use more than twenty satellites to send and receive data.

And, like LEO satellites, MEO satellites aren’t always the most practical solution for global communications networks. They move in various orbits, so it can be challenging to maintain visual contact with stationary ground antennas.

Differences Between LEO, GEO and MEO

There are a few important distinctions to remember about LEO, GEO and MEO satellites:

Another important consideration for satellites is logistics. It takes significantly more resources and time to place a GEO satellite (in a high orbit) than it does to place a LEO satellite. But, if you need full global coverage from a satellite network, the quantity of LEO satellites could pose logistical challenges.

How All 3 Satellite Types Work Together

The most robust communications networks use a combination of LEO, GEO and MEO satellites to achieve full global coverage at all times:

And as more satellites populate the skies and terrestrial technologies continue to advance, telecommunications capabilities will only improve.

First Responder Net: A Network of Networks with Satellite Compatibility

LEO, GEO and MEO satellites are all critical parts of any substantial satellite communications network. While each satellite type plays a different role in global telecommunications, they form the networks that connect the globe.

While the entire world relies upon a variety of telecommunications infrastructure to stay connected, first responders rely on networks with broad coverage areas and peak reliability.

Powered by a combination of all available cellular networks and satellites in GEO, LEO and MEO orbits, First Responder Net delivers premium and unbroken connectivity for critical teams on the move.

If off-grid communications are a must for your team, learn more about the future-proof network solution trusted by first responders worldwide.