Skip to content
Home » What Is OneWeb? Learn About the Future of Connectivity 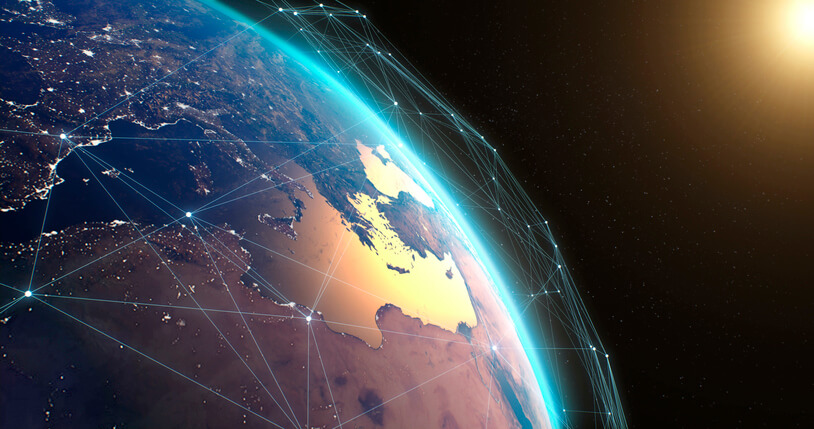 Today, the internet is an essential lifeline that connects all humans—and our things—to an ever-expanding network. Everything from life-saving healthcare devices to office printers connects to the internet to communicate wirelessly, provide real-time data and more.

But despite the importance of a fast and stable internet connection, too many people are underserved. In the US alone, roughly 42 million Americans lack access to high-speed internet. Globally, that number reaches into the billions. People, businesses and entire communities fall behind when internet access is limited.

So, what is OneWeb? And how will the company’s innovations in space-based connectivity change the industry as we know it? We’re diving into these questions and more in this introductory guide.

OneWeb is one of the world’s leading providers of space-based internet. Since the company’s founding as WorldVu in 2012 by American tech entrepreneur Greg Wyler, OneWeb has planned and launched hundreds of broadband satellites.

At the time of writing, OneWeb’s constellation includes 502 satellites—nearly 80% of the company’s stated goal of 648 satellites. Once its entire satellite fleet is in place, OneWeb will be able to deliver wireless broadband internet around the globe.

However, the company’s road to success hasn’t exactly been a straight line. In early 2020, OneWeb filed for Chapter 11 bankruptcy, citing the COVID-19 pandemic as the primary reason. But in November 2020, OneWeb emerged from bankruptcy and installed Neil Masterson, an infotech and software veteran, as CEO.

OneWeb is now backed by various high-profile investors, including:

In other words, many organizations believe in the vision that OneWeb is working toward.

So, what is this vision exactly? And what makes OneWeb’s technology different from existing satellite infrastructure?

It’s an excellent question. Because, in some ways, what OneWeb is doing is nothing new; after all, satellite internet has existed for nearly 20 years. However, OneWeb’s approach to satellite internet differs in a few crucial ways.

The most notable difference is the distance between the company’s satellites and its users. Traditional communications satellites are in Geosynchronous Equatorial Orbit (GEO), making them a mind-boggling 36,000 kilometers (22,237 miles) from the Earth’s surface. OneWeb’s satellites, on the other hand, are in Low Earth Orbit (LEO), only 1,200 kilometers (746 miles) away from us.

Because these LEO satellites are more than 30 times closer to Earth than their GEO counterparts, users can enjoy a low-latency internet experience.

Latency—the time required for data to travel from Point A to Point B—is one of the most vital factors in internet connectivity. Unfortunately, many applications time out after 350 milliseconds of latency, and slow data transmission speeds can hinder life-or-death situations. By installing a web of LEO satellites that circle the globe 13 times daily, OneWeb drastically reduces latency and increases internet speed and security.

The result? Faster, more reliable internet for users on land, at sea and in the air.

What OneWeb Hopes to Accomplish

In a nutshell, OneWeb plans to provide the speed and connectivity of fiber-optic internet to the entire world—without having to lay thousands of miles of fiber cable. The company’s network of satellites can help eradicate the so-called “digital divide”—the lack of access to reliable internet that impacts billions.

OneWeb also hopes to play a role in developing future technologies that can benefit from LEO satellite-based internet, including the Internet of Things (IoT) and 6G.

With that said, they’re not the only players in the satellite internet field.

If you’re familiar with the satellite communications industry, you’ve likely heard of Starlink. But even though Starlink tends to receive all the media coverage, it’s not the only one turning to space to bring broadband internet to every corner of the Earth.

OneWeb’s goal is similar. And yet, the CEO of OneWeb doesn’t see Starlink as a competitor. The reason is a simple difference between the companies’ business models. While Starlink aims to bring connectivity to the average consumer, OneWeb focuses on enterprise clients and government organizations.

There are some other differences between OneWeb and Starlink, too. For example, Starlink’s satellites are even closer to Earth at a mere 550 kilometers (342 miles) away. Additionally, Starlink’s total fleet will eventually number close to 50,000 satellites; OneWeb will have substantially fewer.

These differences aside, both organizations are working to reshape the future of connectivity.

What OneWeb Means for the Future of Connectivity

On that note, we see OneWeb as the leader in the connectivity industry of tomorrow. Once the entire OneWeb satellite constellation is operational sometime in 2023, businesses and communities worldwide will have access to a barrier-free, lightning-fast internet connection.

Here are some of the ways that OneWeb will transform communications and connectivity.

While it may seem counterintuitive, launching hundreds of satellites into space will help make internet access more affordable for millions.

That’s because a significant portion of high-speed internet relies on fiber-optic cables. But laying fiber cable can be prohibitively expensive. In rural areas, rolling out a single kilometer of fiber for backhaul can cost upwards of $5,000.

For enterprises operating in remote or rural areas, OneWeb’s satellites offer a cost-effective alternative to paying for costly infrastructure development. Similarly, hard-to-reach communities can gain access to high-quality internet without a significant investment.

Another benefit of OneWeb’s LEO satellite constellation is secure and stable communications—even in far-off destinations. The guarantee of a solid connection will give search and rescue teams and other first responders the ability to stay in touch and use IoT-connected devices from anywhere.

Decentralized connectivity will also revolutionize internet access for those in highly-censored locales. By making the internet affordable and accessible to businesses and individuals everywhere, OneWeb can encourage freedom of speech and information worldwide.

One of OneWeb’s driving forces is the idea of “Responsible Space.” The company recognizes that even though space lies beyond our planet’s boundaries, humanity must still respect its resources. That’s why OneWeb has developed a low-cost grappling fixture that makes its satellites easy to decommission, along with four commitments to sustainability in space.

Satellite connectivity will also have positive effects here on Earth. For instance, OneWeb’s satellites can eliminate the need for undersea fiber cables.

Aside from being expensive and prone to damage, undersea cables can be problematic from an environmental standpoint. Although the lines are relatively small and light, these cables’ surveying, protection and maintenance can contribute to pollution and disturb fragile marine ecosystems. With OneWeb, inhabitants of remote islands can enjoy fast internet without impacting the environment.

Staying Connected When it Matters Most

Ultimately, OneWeb’s goal aligns seamlessly with ours: Providing organizations with fast, reliable internet, no matter where they are or what they do.

At IP Access International, we understand the need for a stable internet connection—one that’s as reliable in times of crisis as it is on a perfect day. That’s why we’ve built our first responder net to give emergency personnel and government agencies unfettered access to communications when it matters most.

By combining cellular communications and satellite technology, our first responder network ensures that public safety professionals can continue keeping everyone safe. And as OneWeb expands its satellite constellation, this 24/7 connectivity from anywhere becomes even better, faster and more secure.

To learn more about the first responder net or any of our other connectivity solutions, contact us today.