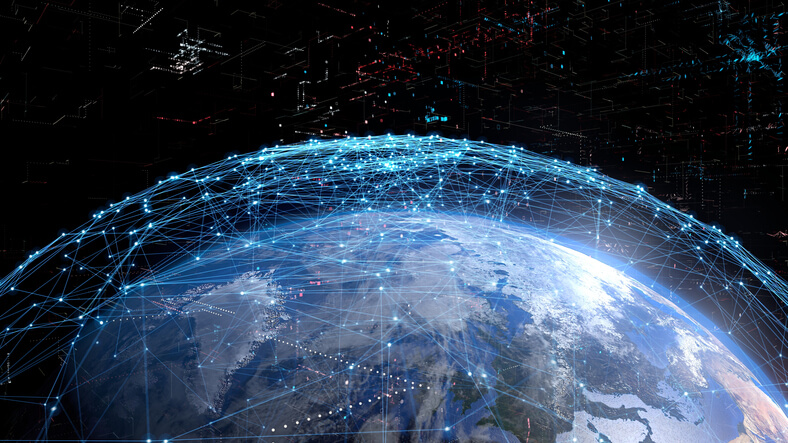 Are you confused by the various satellite technology terms? This satellite glossary will help familiarize you with your satellite solution. Click on the letter link above to jump to your desired section.

ANTENNA – A device for transmitting and receiving radio signals.

ANTENNA NOISE TEMPERATURE – Receiving antennas collect noise from radiating bodies within its radiation pattern, including the Earth and sky. Antenna noise temperature measures how much noise an antenna produces in a particular environment – not its physical temperature.

AMPLIFIER – A device that increases the power of a signal via an external energy source.

APERTURE – The cross-sectional portion of the satellite antenna that transmits and receives signals.

ATTENUATION – Signal loss (usually measured in decibels) due to cabling or reduction of signal strength due to atmospheric conditions.

AZIMUTH – The horizontal rotation angle that a ground-based parabolic antenna must be rotated through to point to a specific satellite in a geosynchronous orbit. The azimuth angle for any satellite can be determined for any point on Earth’s surface, given the point’s latitude and longitude.

BAND SWITCHING – Selecting the “low” or “high” frequency band for the reception of satellite signals.

BANDWIDTH – A measure of spectrum (frequency) use or capacity. For instance, a voice transmission by telephone requires a bandwidth of about 3000 cycles per second (3KHz).

BAUD – The rate of data transmission based on the number of signals or symbols transmitted per second. Most digital signals are characterized in bits per second (bps).

BEACON – A stable radio frequency signal used by earth stations equipped with a satellite tracking system. Beacons can be transmitted from the ground and relayed through the satellite or generated on-board the satellite (also called on-board beacons).

BEAM – A flow of radio waves concentrated in a particular direction. The intersection of a beam with the earth’s surface is referred to as the beam’s footprint.

BLENDED MOBILE CONNECTIVITY – A nearly fail-safe way to maintain communications no matter the circumstances. When one channel fails, another automatically takes its place without human intervention. In addition, mobile connectivity solutions automatically find and connect to any available network without user assistance or configuration.

CAPACITY – A part of the satellite’s bandwidth and power used to establish one or more communication channels.

CARRIER RATIOS – There are three types of carrier ratios:

CHANNEL – A frequency band in which a specific broadcast signal is transmitted. The Federal Communications Commission (FCC) specifies channel frequencies in the United States. The higher the frequency, the higher the gain that can be achieved with smaller antenna sizes. Higher frequency bands are more susceptible to rain fade.

COLOCATED – Two or more satellites occupying roughly the same geostationary orbital position when viewed from the ground. The satellites are several kilometers apart to avoid collisions, and both use different frequency bands.

COVERAGE – The area or footprint on the earth’s surface covered by a satellite’s transmission beam.

DAMA (Demand-Assigned Multiple Access) – A means of assigning telephony channels in a transponder according to immediate traffic demands.

DELAY – The time it takes for a signal to go from the sending station to the receiving station via the satellite. The delay for a single-hop satellite connection is close to one-quarter of a second.

DOWNLINK – The link from the satellite down to the Earth station.

EARTH STATION – The ground equipment that transmits and receives electromagnetic waves, also referred to as a parabolic antenna. Also called a ground station.

EIRP (Effective Isotropic Radiated Power) – The signal strength that a satellite transmits toward an earth station (or vice-versa), measured in dBW (decibels relative to one milliwatt).

FOOTPRINT – The area of the Earth’s surface from which an Earth station can transmit to or receive from a particular satellite.

FREQUENCY BANDS – Internationally, frequencies are divided into well-defined bands. For satellites, the relevant bands are:

GAIN – A measure of amplification expressed in decibels.

GEOSTATIONARY EARTH ORBIT (GEO) – Satellites orbiting at 35,786 km (22,282 mi) above the equator in the same direction and speed as the earth rotates on its axis, making them appear fixed in the sky.

GROUND SEGMENT – All earth stations operating within a particular satellite system or network, connected to the end-user’s equipment directly or via a terrestrial network.

HPA (High Power Amplifier) – A device that accepts a weak input signal and boosts it to a suitable power level for transmission over an earth-space link.

HUB – The master station through which all communications between terminals must flow.

INCLINATION – The angle between the plane of a satellite’s orbit and the Equatorial plane. A perfect orbit of a geostationary satellite has an inclination of 0 degrees.

INTERFERENCE – Any signal that interferes with the reception of radio waves. Interference can be caused by transmissions within the same satellite system, other satellite systems using the same frequencies, or ground-based sources.

LATENCY — The time it takes for a signal to go from the sending station through the satellite to the receiving station. All stationary satellites are located 22,300 miles above the equator, meaning one round trip is 90,000 miles or more. The speed of light is 186,000 MPH, so the time it takes for a round trip is about 500 milliseconds (1/2 second).

LOW EARTH ORBIT (LEO) – Satellites orbiting from 160 to 2,000km above the earth, taking approximately 1.5 hours for a complete orbit. LEO satellites only cover a portion of the earth’s surface at any time.

LOW NOISE AMPLIFIER (LNA) – A preamplifier between the satellite antenna and the earth station receiver. For maximum effectiveness, it must be located as near the antenna as possible and is usually attached directly to the antenna receive port. This boosts the desired signal while adding as little noise or distortion as possible.

LOW NOISE BLOCK DOWNCONVERTER (LNB) – The combination of LNA  and downconverter built into one device attached to the feed. It is used for the downlink satellite transmission by converting a band from a higher frequency to a lower frequency. This is simply the receiver on a satellite dish.

MODEM – A piece of network equipment containing a modulator and demodulator for receiving or transmitting satellite signals.

MEDIUM EARTH ORBIT (MEO) – Satellites located above LEO and below GEO satellites, typically traveling in an elliptical orbit over the North and South Pole or in an equatorial orbit.

MHZ (Megahertz) – Used to measure frequency and bandwidth. One MHz is equivalent to a million hertz, or one million cycles per second.

MULTIBEAM – Multiple antenna beams on board a satellite covering a contiguous geographical area instead of a single wide-area beam.

NOISE (THERMAL NOISE) – Any electrical disturbance in a circuit or communication channel that disrupts the receiver’s ability to reproduce the original signal.

OFF-GRID COMMUNICATIONS – Communication devices that use satellite technology to operate when everything else is offline or in a remote location.

OUTAGE – When the quality of a telecommunication service or link falls below an acceptable performance level or fails completely.

POINTING ANGLES – The elevation and angles that specify a satellite’s direction from a point on the earth’s surface.

POLARIZATION – A technique used by satellite operators to reuse the satellite transponder frequencies when transmitting signals to Earth. Two methods are possible: linear and circular. To successfully receive and decode these signals on earth, the antenna must be outfitted with an adequately polarized linear or circular feed horn to select the desired signals.

RAIN FADE – The reduction of satellite signal strength due to rainfall.

ROUTER – A physical device joining multiple computer networks together.  Data packets based on network layer information are forwarded between networks,  enabling applications such as VoIP, video and data.

SATELLITE LINK – A radio link between a transmitting station and a receiving station via a communications satellite, consisting of one uplink and one downlink.

SATELLITE RECEIVER—A receiver designed for a satellite reception system which receives modulated signals from an LNA or LNB and converts them into their original audio, video, or data form.

TELEPORT – A Telecommunications Hub, or SuperHub, which provides access to communications satellites and other long-distance media.

TERMINAL – One of the communications stations that receives, processes, and transmits signals between itself and a satellite.

TRANSPONDER – A device on board the satellite that receives signals uplinked from an earth station and amplifies and transmits them back to earth on a different frequency.

UPLINK – The link from the earth station up to the satellite.